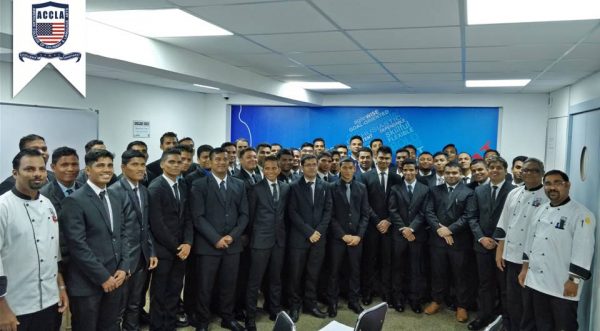 Food is one of the most important experiences on a cruise ship. Chefs must constantly serve delicious cuisine to keep guests coming back year on year. But today, it is not only comfort food, such as burgers, pizzas and ice creams that have a huge fan following on board. New age dishes, fusion food, and experimental cuisine are seeing many cruise-goers take adventurous steps in the world of food.

Cruise ship chefs want food to be an experience rather than an indulgence. Companies are hiring top chefs including famous British restaurateur Jamie Oliver and noted Japanese culinary celebrity Nobuyuki Matsuhisa to revamp menus and create an inspired experience for guests that leave a lasting impression.

Celebrity restaurateur Charlie Palmer designs menus for Seabourn cruises and brings his experience from years of tantalising tastebuds to the ship’s Aureole dining room. Guests can enjoy innovative appetisers such as citrus-marinated flukes, sautéed escalope of foie gras, eggplant relish and hummus. There could be pink-roasted rack of veal, or scallops wrapped in smoked bacon as well.

Chefs on board are equally conscious of guests’ preferences and many include vegetarian-only options, such as entrées like toasted angel hair pasta with black trumpet mushrooms and a stew of braised artichokes, with white beans, thyme-roasted tomatoes and diced saffron potatoes.

Wonderland on the Royal Caribbean cruises serves what it likes to call imaginative cuisine that includes buffalo chicken eggs, slow-cooked baby beets and liquid manzanilla olives. It also has a dish called Vanishing Noodles with chicken, duck and truffle; and another called Liquid Lobster which features bone marrow and olives.

It isn’t just the ingredients used in the dishes that makes them different, but the way they are presented and eaten. Each dish is meant to be an experience in itself, that uses all the required senses – taste, smell, sight, touch, perhaps even hearing, as one listens to the sizzle of hot dishes or the sigh of steam rise.

Let’s take the Vanishing Noodles, for example. It appears before the guest as a bowlful of delicious udon noodles ready to be eaten. But when a savoury hot chicken broth is poured gently over them, the magic takes place. The noodles dissolve, and the dish becomes almost a soup with a variety of tastes – Nueske bacon, sous vide capon, black truffles and root vegetables. The chefs created the noodles themselves from an emulsion of duck liver, cream and chicken broth, which each bring their own game to the dish.

The Wonderland restaurant also serves an edible balloon on a string. The balloon is made of taffy, and once popped in the mouth releases a breath of helium with a green apple infusion. This ticks all the boxes for innovative cuisine as it appeals to all the senses, and is fun, memorable and exciting for the guest.

Innovative cuisine blends a deep knowledge of ingredients and how to cook them with imaginative ways of presentation. This requires cruise ship chefs to have intimate knowledge of the basics so they are able to recreate these dishes as designed by their creators. Every member of staff in a galley that serves dishes like these is usually hand-picked, chosen for their skills, experience and ability to work with precision.

It goes without saying that work experience in restaurants that serve innovative cuisine, headed by celebrity chefs, goes a long way in boosting your own career profile.

Today, cruising is becoming increasingly inclusive, with people across ages and dietary needs coming on board to have a good time. This makes cruise ship chef jobs that much more skilled as many dietary restrictions, such as allergies, can be harmful to the guest.

Voluntary restrictions include diets such as vegetarianism, lacto-ovo vegetarianism, veganism, pescetarianism and others, in which people do not eat certain food items or meats. This is mostly prompted by personal or religious philosophy and many can be quite strict about it. This means that any mistakes on the chef’s part can lead to complaints to the cruise line, so staff in the galleys must be careful.

Here is what the most popular diets include:

Vegetarianism: A diet that excludes meat, including products that result from animal slaughter, such as gelatin and rennet. Hindus, Buddhists and Jains often follow this diet, although some may be lacto-vegetarian. Jains additionally do not consume root vegetables such as potatoes, carrots, onions, garlic, etc, as well as mushrooms, fungi and yeasts. Strict Jains may not consume fermented foods either such as beer, wines and other alcohols.

Fruitarianism: A diet that consists mostly of raw fruits

Lacto-vegetarianism: A vegetarian diet that includes eggs, but excludes dairy.

Ovo-vegetarianism: A vegetarian diet that includes dairy, but excludes eggs. Many Indians follow this diet, and as such, a lot of north Indian cuisine adheres to it

Lacto-ovo vegetarianism: A vegetarian diet that includes dairy and eggs

Veganism: Vegans extend the vegetarian diet to exclude any items produced by animals, including bee honey, dairy and eggs

Pescetarianism: A diet that includes fish but not meat

Flexitarianism: A diet that is mostly vegetarian but occasionally includes meat

Halal food: Many Muslims strictly adhere to diets that consist of halal food or food allowed to be eaten under Islamic law. Those not permitted are called haraam, and include alcohol, pork, and meat from any animal not slaughtered according to Islamic ritual methods

Kosher diet: Cruise ship chefs catering for Jews on board must learn more about their Kashrut laws which requires food to be prepared a certain way for it to be considered Kosher. It prohibits alcohol, caffeinated beverages and certain shellfish.

In some diets, such as the variants of vegetarianism, chefs use substitutes, such as vegetable oil instead of butter, soy or almond milk instead of cow’s milk, or a mixture of baking powder, oil and water instead of egg.

Cruise ship chefs must also consider diets for guests with food allergies. Any food can cause an allergy, but the most common ones are cow’s milk, eggs, peanuts, fish, shellfish, tree nuts like cashew or walnut, wheat and soy. Peanuts, fish, shellfish, soy, tree nuts, and gluten from wheat can cause severe reactions including anaphylaxis characterised by swelling and breathing problems, which must be treated using epinephrine.

Typically, guests fill out a form ahead of the cruise, or on the first day, noting their dietary restrictions and allergies. Main dining rooms and specialty restaurants often point out the main allergens on the menu card itself, and kitchens ensure they are equipped to handle such cases. For example, dishes made for people with tree nut or peanut allergies will in no way come in contact with those containing the allergen.

Many other diets exist, such as Paleo diets, macrobiotic diets, organic food diets and Mediterranean diet. Because any hospitality venture, including cruises, are rated mainly on service, cruise ship chefs and other kitchen staff must go out of their way to ensure standards are met, particularly when the health of a guest is concerned.

Cruise ship chefs should constantly read about the various diets and allergies, what to include and what to exclude, so they are better able to help guests with specific culinary requirements.